Did you know handwriting can tell not only about individual people, but whole generations?

The Career Profiler has studied handwriting for over 10 years, collecting samples from a variety of people over many generations. You may never have thought of the fact that handwriting changes over time. But it does. In the few generations between WWII and the end of the century, the differences in handwriting are like night and day.

But what does career profiling or coaching have to do with handwriting in the first place? If you have ever had your handwriting analyzed, you know that a trained expert can describe your key characteristics, traits, and behaviors with pinpoint accuracy. For some, this is just plain freaky.  For others, it is intriguing and they want to learn more. In short, handwriting is a proven, accurate assessment tool. If this is all new to you, you may feel skeptical. Let me convince you.

Handwriting analysis is a highly regarded skill in Europe, particularly Germany and France, where it first began.  Businesses often use it during the hiring process. But in the U.S. and Canada, it is still largely misunderstood or not even recognized as a viable assessment tool. Ignorance, however, doesn’t mean it’s not viable. Have your handwriting analyzed and see for yourself! See if an expert can glean your traits from your handwriting. Let me demonstrate in broad terms what handwriting analysis can tell us about groups of people – namely, generations.

The Silent Generation are those born between 1924 and 1945. This is probably your parents’ or grandparents’ generation. This group of adults has a distinctive handwriting style that depicts the characteristics of this generation. They use exclusively cursive writing. One significant aspect of cursive writing is that all the letters in a word link to the one next to it.  The bottom of each letter connects to the next with a gentle, curving line. This consistently connective writing tells much about the way the generation views each other, the world, and how things are accomplished.

In contrast, Generation Y falls into the most recent handwriting analysis group. Often called Millenials, their writing is marked exclusively by printing. Much of the reason for this decline is because of the rise of typing and the decrease in the necessity of cursive in everyday life. Some schools no longer teach cursive writing.

Bridging this gap are the Baby Busters and Baby Boomers. These generations have the most variety in writing style. They use both connective writing and print script (various forms of connective and disconnective writing). However, it is rare to find someone from the Baby Boomer generation that exclusively prints. There are some among the Baby Busters. So what does this say about each group? Of course, these are broad generalizations that certainly do not apply to each person in a generation. We are simply looking to see what conclusions we can draw from the fact that the older generation uses cursive, the middle uses a mix, and the younger uses printing.

The connective writing style of the Silent Generation says that this group thinks in terms of “us.” They feel connected to their peers and think like each other. There is a mutual understanding and a group-think. Therefore, they also understand each others’ needs, wants, and goals. An individual’s needs are woven into other’s needs. They understand that helping others achieve their wants and goals enables them to fulfill their own wants and goals. That is because they essentially want the same kind of things. The needs of the group is paramount. Personal needs are always subject to the filter of group needs.

As one would expect, the Silents attend church and serves on church committees. They participate in not one but multiple civic organizations within their lifetime. And as seniors typically do, they join hobby or leisure groups that share their interests.

As an example of the Silent culture, The Career Profiler recently became vice-president of a long-running garden club in her area. In looking through the historical records of the group, she found that every member held multiple positions during their tenure. But, even more significantly, if a member missed more than one meeting, their membership was dropped automatically. Reminders were never sent out before a meeting. Today, there is no one in the club under the age of 45. As you can imagine, the members are mostly Silents, plus a few Baby Boomers. There are no Busters or Millennials in the group at all. The conclusions we draw from this example should be taken with a grain of salt, given that older people are more likely to own a house and therefore have space for a personal garden, and leisure gardening is usually a hobby taken up by older people. But in general, the older generations take community responsibility very seriously and understand that if a group is to function well, everyone has to pitch in. 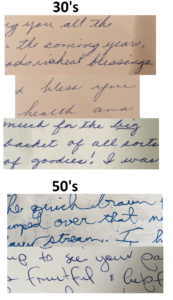 The progression from Silent to Boomer handwriting: 50’s already showcases a mix of print and cursive, though most letters are still connected or close together

It’s important to remember that generations are connected to the ones before and after them.  So as we move on to the Baby Boomer and Buster generations, remember that Boomers are the children of Silents, and their children are Millennials.  Boomers and Busters have the most variety in writing styles and in their work, thinking, and life styles.  Boomers and Busters are experimenters.  They explored all the following and more: 60’s mod styles, 70’s hippy lifestyles, 80’s achievement pursuits, and 90’s leisure living.  Within these eras were the high-flying financiers and the peace corp supporters, along with the 9-5ers and the druggies.  Their various handwriting styles reflect the variety of thinking and living styles.

There are other distinctives too.  Silents raised their Boomer children in Sunday School, but most dropped out of church.  More than likely, they didn’t raise their Millennial children in any religious tradition.  This generation gave up on commitments, not just to church but also to marriage.  More than any previous generation, this one divorced in ever increasing numbers, especially among those without strong, intergenerationally networked communities.  One reason Canadians file for less divorce than Americans is in part because of their more historically networked communities.  However, the fact that this generation had the gumption to break with community and work traditions means that they were able to trailblaze the Information Age.  Without this growing individualism and experimentation, the world as we know it would not exist.  Their life experiences greatly shaped the lives of their children, the Millenials.

The changes continue: the late Boomers mix print and cursive with more obvious spaces between words and letters, while some Busters opt for print only. Millenials, though still young, showcase a print style different than any of the others: not a hint of cursive, and larger spaces than ever

Let’s jump to Millennials.  They have the exact opposite writing style of the Silent Generation. Their print-only style of writing says that their thinking is disconnected from others.  Every letter stands alone.  Every thought is about how to meet my needs, goals, and wants.  Much of their culture and lifestyle is a result of the way their parents raised them – in reaction to the Boomer/Buster experience of the world.

Millennials weren’t raised in community; Boomers and Busters didn’t spend much time in intergenerational, interconnected network of people. Thus, their children didn’t experience this either. A network like this includes friends and peers, as well as people they don’t necessarily like.  A community is multi-generational, sharing a sense of history and a common goal.  Most Millennials weren’t even raised by two parents!  So it’s not surprising that Millennials have an aversion to intimacy and a complete lack of cultural understanding of community.  To them, community is a gathering of friends or strangers in the same place at the same time.  They have no exposure to a multilayered, networked group of others.  Additionally, Millenials’ parents raised them with the ideals of individuality, creativity, and uniqueness.  This American feature of individualism has developed over time and is a defining feature of the younger generations.

Another part of the reason for that is this is that Millennials have, for the most part, not been raised in church.  Church is a community which naturally teaches the fundamentals of groupthink or democratic processes.  It functions completely at the will of the people, around a common value, to achieve a common goal.  Millennials’ parents threw out groupthink in the 60’s and 70’s, when individualism and building a unique identity prevailed.

The Highland Ability Battery confirms this generational thinking shift. One of the 19 test modules measures generalist vs. specialist thinking styles.  Generalists think like others.  Specialists, on the other hand, think uniquely and use words with meanings other than the masses might assume.  Within the last five years, test results have uncovered that Millennials scores significantly higher as specialists than as generalists – in a greater percentage than ever before in the history of the test.  As a result, they created a “student” version of the test which adjusts for this shift to comply with historical standards.

This is just a brief, general example of what handwriting tells us about people.  There are many more characteristics one can learn from a person through handwriting.  Find out what it could mean for your career by getting in touch with The Career Profiler.  She can analyze your handwriting and let you know how your personality characteristics affect your work.

We also have more blogs on handwriting analysis if you want to know more. Our next handwriting blog is a case study and why handwriting should matter to employers and managers.