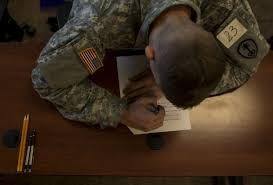 Aptitude testing actually began in the military. It is a quick, easy, accurate way of making sure you get the best job for you

The Highlands Ability Battery and the Johnson O’Connor test are both highly regarded and very well researched aptitude tests. An aptitude test helps you understand yourself and choose the best career for you.

The assessments have the same origins but now offer distinct benefits for career and leadership purposes. If you’re wondering which one of these great tests fits you better, this is the blog for you!

The U.S military began researching natural abilities in the 1920s to quickly place recruits into appropriate jobs.  They didn’t have time to interview at length nor could they afford to get a placement wrong. It could cost lives and therefore the war if they mis-assigned their recruits. That’s why they developed aptitude tests. So you can see how it’s silly to disregard such tests as a waste of time or money! They were born out of the necessities and efficiencies of wartime. Today, an aptitude test can help find the best job for you.

Shortly thereafter, a researcher at General Electric named Johnson O’Connor took up the same task on behalf of his company.  Rather than determine the natural abilities for military jobs, he determined the aptitudes suitable for the diverse work done by GE. Other companies also joined in researching aptitudes as a way of hiring the best people for the job. Taking an aptitude test was a relatively easy way of not only hiring the right person but getting the optimal work out of employees.

The Highlands Steps In

In the 1980’s the Johnson O’Connor Foundation carried on the quest to research and publish aptitude findings. They continued to do research based on in-person manual testing protocols.  In the latter part of that decade, the Highlands Company bought the rights to the paper-pencil version.  In 1999 they launched the online computer version to the general public.  For the launch they trained about 50 career coaches and therapists to debrief the assessment – including your Career Coach and Profiler Marjorie Wall Hofer!

Unlike many trained at that time and since, she brings with her a history of knowledge and experience in career testing and about careers themselves.

Now that you know that both aptitude tests started from the same historic point, let’s look at the differences as they stand today:

Online via your computer

In the Career Profiler’s opinion, you will receive significantly more information from the Highlands Ability Battery. Depending on your personal situation, you get the most important information at a much lower cost and greater convenience.  Some careers like surgeons or high-end designers can benefit from the extra time and fees to complete the Johnson O’Connor assessment.

We hope that this brief history and comparative chart have provided you with sufficient information to make a decision between the tests. If you’re still having trouble deciding, get in touch with The Career Profiler and she can help you see which will be best for you.

If you’ve settled on the right aptitude test for you, it may still not be enough. Find out why test consultations are often the key to unlocking your road to success.

A test isn’t enough… Get a consultation!